The current chapel at Sacred Heart College was erected in 1956 as a memorial to the past pupils who fought and fell for their country during the Second World War (1939 – 1945). A plaque with the names of 49 Old Boys who gave their lives in the First World (1914 – 1918) can be seen at the back of the College Hall.

Gazing down from behind the Altar is a statue of Marcellin Champagnat, the founder of the Marist Brothers. The statue was sculptured by a Hungarian sculptor and artist, Mr Zoltan Borbereki.

There used to be a bell behind the chapel which came from the third General House of the Marist Brothers. The first General House was in France at the Hermitage just outside St-Chamond. The General House was later moved to St-Genis Laval, Lyon. When all religious institutes were expelled from France in 1903, the Brothers moved the General House to Grugliasco in northern Italy. In 1958, the Generalate was moved to Rome. Br Jordan, the Principal of the College in the late fifties and who was responsible for the building of the Chapel, requested that the bell at Grugliasco, which had called the Brothers to prayer and meals for over fifty years, be given to the College for its Chapel. This was agreed to and hence the bell that used to hang outside behind the Chapel came to the College. In recent years, it was taken down and hung in the foyer. Sacred Heart College has started a new tradition last year. At the beginning of each school year, the bell is moved to the front of the Chapel where the Grade 1’s of that year ring the bell to mark the start of their school career. The Matrics of that year ring the bell at their Valedictory Mass to mark the end of their school career. 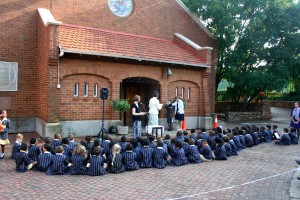 Categories: Uncategorised.
« Welcome to Our First Alumni Website!
Betting on the End of the World »

Betting on the End of the World

For nearly two decades now, I have been dealing with the issue of change in schools. The literature...

The current chapel at Sacred Heart College was erected in 1956 as a memorial to the past pupils who...

Welcome to Our First Alumni Website! Our Alumni, now have their very own website and their own logo!...

The first larger community the child comes into contact with, is the school. Incorporation into a Co...

The scenes that played out on our televisions in the past two weeks were made even more meaningful f...